Last year, more net generations of non-Western foreigners left our country than native Dutch, and this is the first time. This is clear from the figures published today by Statistics Netherlands.

Part 2 is here and deals with net immigration from groups of origin, continents, countries and generations.

Net emigration of aboriginal people in 2013 was 6,402 and that of non-Western 2nd generation was 6,569. A little more, but still remarkable because the group of non-Western immigrants of 2nd generation is much smaller than that of the native Dutch.
The graph shows a marked decrease in net emigration from 2008. This seems to come from the crisis and the fall in house prices, which has even led to negative wealth and emigration is not an option at the moment.
On average, 13,000 native Dutch people emigrated and 6,000 non-Western and 3,000 Second-generation Westerners.

The Aboriginal population group is, of course, much larger than the two second-generation immigrant groups. That is why I have also calculated the number of net emigrants per 10,000 people in different population groups, as you can see in Figure 2. 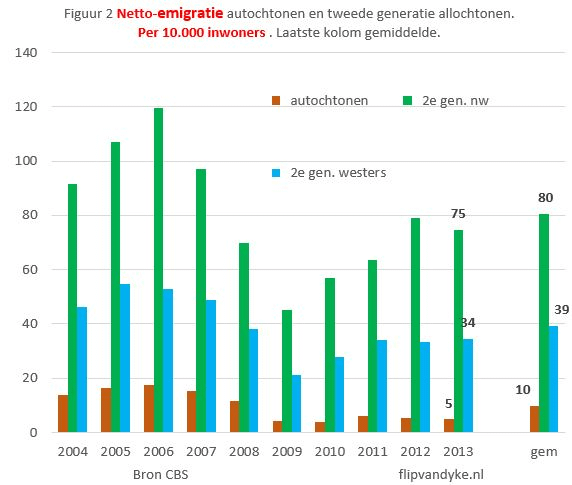 In 2013, five out of 10,000 Dutch nationals emigrated. It’s half promile. So very little. The second non-Western generation had 15 times more with 75 and the Western generation had 34. The 10-year average for indigenous people is 10 per 10,000, as can be seen in the last column, i.e. 0.1% per year and non-Western 80 (0.8%).
If you assume that 0.1% of native Dutch people will continue to apply in the future and if you assume an average age of 80, about 8% of the native Dutch who are now born in the world will die in another country.

It is incorrect to do the same calculation for non-Westerns. First of all because this century, the number of (young) people who immigrate and then emigrate again has increased considerably – of course, they take their children (2nd generation) with them. But also because the group is very young with a relatively large number of people in the preferred emigration age of 20 to 35 years. Of course, other factors will also play a role, such as not feeling at home and unemployment.

Second-generation Westerners have far fewer emigrants than non-Westerns, mainly because their parents – a foreign-born relative is enough to be second-generation – often immigrated a long time ago. Take our king, for example, whose father immigrated in the mid-1960s, but Frits Bolkestein is also a second generation, as is Geert Wilders. Not now, young people.

It is expected that non-Westerns will become much more like Westerners, because this group will also age, the less the second generation will be born because there are fewer migratory marriages. Instead, the third generation will grow further. These are already visible developments.