Little attention is paid to the age of migrants. Is it true that the immigrant is 25 years old and the emigrant is 65? What is the average age of the migrant? I find some important questions myself. In this piece, I give the age of immigration by country of birth.

I would have preferred to take by group of origin, but unfortunately this table does not exist in Statistics Netherlands. Age distributions are calculated on the average of the last five years. Again, it is by country of birth and it says nothing about natives/immigrants or nationality. However, I make a few comments on that in the text, so make no mistake about it. Unfortunately, this happens sometimes. For more information on the difference, see this article.

This article also contains the final figures by country of birth in 2011. I cover four groups: people born in the Netherlands, Western countries (without NL), non-Western countries and all countries. Each group has provided figures on migration since 1995 and the average number of immigrants by age over the past five years.

This is not surprising given that emigration has increased over the past year, given the economic situation. It is a little strange that immigration has also increased. Immigration normally falls in bad weather, especially because asylum immigration has not increased. We’ll see where it comes from, but first the age distribution:

Of course, people born in the Netherlands have more people emigrating than those who immigrate (so they are returning migrants). Emigration has picked up over the past two years, while immigration remains the same. Even a journey of origin: immigrants born in the Netherlands consist of two ethnic groups: indigenous peoples and two immigrants of the electronic generation. About a third of second-generation immigrant emigrants. There are no figures yet for the origin migration group for 2011 (they will not be published until early 2013). The increase in emigration in 2010 is entirely due to two non-Western immigrants of the electronic generation.

Out of 100 emigrants, 54 immigrants and emigrants are present over the period. That was exactly half of it in the last 10 years. Aboriginal people come back more often than immigrants.
The age distribution:

We see a lot of starts at zero and one year. Besides the “normal” immigrants, you can also think of the Dutch who live abroad and come to the Netherlands to give birth, but also of course the children of first generation immigrants. After that, the willingness to drag children abroad is rapidly diminishing. From the age of 18, emigration immediately began to increase sharply. We are seeing a slight increase at age 65, but it is not very important. However, if you can believe the internet forums, it is full of Dutch natives abroad. They are apparently bored to death and hang out on the internet all day complaining about the Netherlands. These people are probably still widely registered in the Netherlands. Many emigrants return quickly.

We can immediately see where the increase in total immigration to the Netherlands comes from: 9,000 more from Western countries (or Eastern Europe). There were also 6,000, so the balance was 3,000. The migration surplus at the turn of the century was largely due to immigration from the former Yugoslavia and the Soviet Union, while the EU’s net migration was also higher than in subsequent years because of the economic good of our country. There is much more to say about migration from Eastern Europe in recent years so I am doing a separate blog about it. Out of 100 immigrants and emigrants, 66 emigrants were present over the period. Over the past 10 years, the ratio has been 100:68.

Almost half of immigrants are between the age of 20 and 30. Emigration often follows immigration quickly. The average age of the immigrant is 28 and that of the emigrant is 32. Here too, we see that very young children are taken away, but the older ones are much less so. There is also virtually no effect over 65 years of age.

Non-Western countries are all African countries; Asia (including Turkey, excluding Japan and Indonesia) and all Latin American countries. At the turn of the century, we took in many migrants on asylum from Iraq and Afghanistan. This figure has fallen sharply as a result of the measures taken in 2001. There has also been much more emigration. With reduced immigration, there has also been less emigration. In recent years, you have seen an increase in emigration. Against 100 immigrants, there were 54 emigrants over the entire period. Over the past 10 years, this ratio has been 100:70.

The pattern of age distribution is very similar to that of Western countries, but you also immediately see that emigration occurs later. The average age of the last 5 years was 27 years for immigrants and 33 years for emigrants.

conclusion:
You see the same pattern in all groups: migration occurs at a young age. I myself thought that there would be more immigration of people born in the Netherlands at an older age. However, this is not the case. There is also virtually no effect over the age of 65 on emigration from the Netherlands. Return migration is high for all groups. Especially in the last 10 years, Eastern European countries are demanding special attention and I will make it a separate blog.
For the rest, we will continue to experience significant migratory flows; immigration and emigration. Many people have free access to our labour market. Not only are EU nationals, but there are also more and more Dutch nationals abroad. These people come easily and leave as easily. What contributes greatly to migration are modern media and cheap airfares.
I would say you have to get used to it. 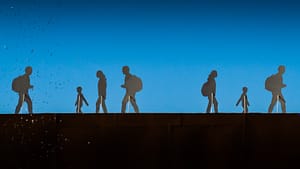